Today is 21 days, which is three weeks of the omer: malchut she’b’tiferet.

Get ready for a couple days of players from Steel City: Today’s pick is Pittsburgh shortstop Arky Vaughan, while tomorrow guest writer Joey Glick will highlight one of his favorite Pirates.

As I researched the player to mark three weeks of “Full Count” on Omertime, I learned about Vaughan for the first time. Apparently, I’m not alone in not having heard of him: Joe Posnanski rates him the best least-known baseball player and remains mystified as to why fame eludes him. He was a nine-time All-Star and the NL batting champion (1935) and NL stolen base leader (1943) during his 13-year career with the Pirates and the Brooklyn Dodgers. He struck out only 276 times in 6,622 at bats.

And there are some great stories about him.

Joseph Floyd Vaughan hailed from Arkansas, the source of his unoriginal nickname, despite the fact his family left the state shortly after he was born. But apparently throughout his life he maintained the Arkansas accent he learned from his parents, who moved the family to Southern California for his father to work at Standard Oil. And it was in the Golden State that Vaughan played high school football with a kid called Richard Nixon.

The president wrote Vaughan’s daughter this epigrammatic note of congratulations shortly after his induction into the Hall of Fame in 1985:

I was a substitute tackle on the Fullerton High School championship 130-pound team and remember Arky as our star halfback–fast, hard-nosed and even then a real professional. Sincerely, Richard Nixon

Vaughan had a bit of a rocky start defensively at shortstop, when in his rookie year he led the league in errors (though he also batted .318 with 61 RBI). His offensive was valuable enough, though, that one of the greatest shortstops of all time, hometown hero Honus Wagner, was brought in to help him out. After many days of intensive work, Vaughan was asked how the hours-long sessions were going and had this hilarious observation to share. “I’m not sure,” he said. “When I asked Mr. Wagner what to do, he said, ‘You just run in fast, grab the ball and throw it to first base ahead of the runner.’ But he didn’t tell me how.” Something must have sunk in, though, because historian Bill James names Vaughan as one of the two greatest shortstops in the 20th century. The other? Honus Wagner. 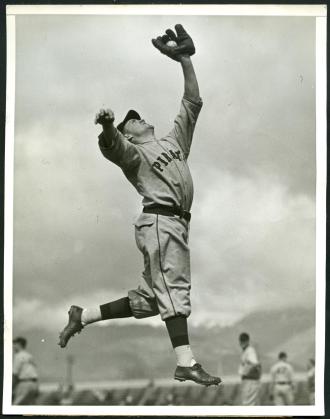 Vaughan died tragically at age 40 in a boating accident, and even in the wake of his death he got just one, single, solitary vote for the Hall of Fame in 1953. The oversight wasn’t rectified until 32 years later, and even then only after a concerted campaign by a dedicated journalist. The Hall of Fame then issued its standard commemorative envelope for each of the new inductees — and spelled Vaughan’s name wrong.

I chose Vaughan today for the simple reason that he stood up to the man. As much as I like team loyalty, I am an even bigger fan of taking risks for principle. In 1941, Vaughan was rather mysteriously traded to the Brooklyn Dodgers, in part because of the friction that had developed between him and Pirates’ manager Frankie Frisch. But it was out of the frying pan and into the fire, so to speak, when Vaughan landed next to Leo Durocher (whom we’ve met before). The volatile Dodgers’ manager and the reserved shortstop never had a chance.

Vaughan finally had more than he could take in 1943 after Durocher suspended pitcher Bobo Newsom — himself a mercurial man — for three games, telling the press that Newsom had thrown a spitball, an illegal pitch. Vaughan knew it wasn’t true and confronted Durocher. Vaughan then went to his locker, took off his uniform, and then came back to the manager’s office. Throwing the clothes in Durocher’s face, he said (as teammate Billy Herman would later tell it):

For perfectly owning a tyrant when it counted, let’s count day 21, beauty that manifests as sovereignty, in honor of the best player you can now tell everyone about.