I I first fell in love with the game of hockey when I was around seven years old. Countless moments are embedded in my head, moments that remind me of the magic and beauty that hockey can bring. Elyssa wrote an incredible article, so I get the easy job. Hockey for me has always been about community, so I reached out to my friends and family asking them about their most memorable and meaningful hockey moments. Below you will see their responses. Enjoy!

Hockey has been part of my life as long as I can remember. My earliest memories are of strapping on my equipment and getting on the ice with my friends, playing shinny in backyard rinks and suiting up for my house league team. Though I played year after year, I don’t remember ever winning anything. It was only as an adult that I found some success, two years ago my house league team of friends, some of us who have known each other since preschool at Holy Blossom Temple in Toronto, pulled out an overtime victory to win the championship. What made it extra special is that in overtime, I won the faceoff in the offensive zone, passed it back to the defenseman who passed it to the corner to Brian who passed it to me in the slot where I buried the winning goal!

When my kids were ready, nothing gave me more pleasure than getting them into skates so we could head out to the rink together. My son Jacob ended up on house league teams as well, but he’s actually a way better player than me and quickly moved up into select. Then rep single A. I couldn’t be prouder of watching him play including his first goal, which I kept on voicemail when he called to tell me about it. I have been one of the coaches for his team over the years and 2 years ago our team the Toronto Avalanche played in an outdoor tournament in Buffalo in the middle of January. We pulled off an amazing come from behind victory and here attached is a picture with him wearing the medal. It’s one of the most special moments in my life.

I was at the game where the Sharks came back from being down 3-0 with 10 minutes to go in Game 7 of Round 1 against the Knights. It was a terrible game, insanely frustrating, and then our Captain went down, and something just shifted in the team. Once Couture scored the first goal (I still get chills watching the video of him screaming “That’s one!”), there was just a feeling we could score more, that suddenly this game that felt so out of reach was a game again. The OT winner happened right in front of our seats, and the whole arena erupted. I’ve never heard anything so loud. I cried. My dad cried. Everyone hugged (remember hugs?!), and you just felt like a part of something bigger than yourself. It’s why I love sports – it brings people together who share a passion for the game, and for a brief time, that’s all that matters.

Without a doubt its Auston Matthews scoring 4 goals in his first game in the NHL. I was in Switzerland and tried to stay up all night to watch the game, fell asleep after one goal (around 2am), woke up to see he had 4. No other player in the NHL has scored four goals in his first game. The expectations for the 2016 First Overall pick was already high, and this game demolished even those expectations.

I wasn’t able to watch this game live. I was leading Yom Kippur Neilah services in San Rafael, California, and not checking my phone. Once Yom Kippur was officially over, I checked my phone to see my dad, brother, and friends all texting me, “Are you watching this?!”. I was not, but waited until I was home at my TV to rewatch the whole game, to watch Auston Matthews, a player who represented hope to a franchise that had brought its fans moments of pain over the past decade, score four goals in an NHL game. No other player had ever done this before. I remember my joy and elation when I watched the goals, even though we lost the game. I also remember Auston Matthews saying that it was cool to score four goals, but ultimately getting a win was more important, and so the team had more work to do. The beginning of a new era for Leafs fans.

Game 2 of the Canada Soviet Series in 1972. The first time we had played the Russians. Game 1 lost 7-3. We got killed. We were expecting to win the series 8 games to none. In game 2, we were shorthanded. Peter Mahovlich went end to end deking two defensemen and a goalie to score a shorthanded goal. Best goal I ever saw. We went on to win that game.

For sure the Summit Series Paul Henderson goal is a perfect one. I actually wrote an essay for a Canadian Cinema course about how that moment being televised was the first time the entire country had banded together for a cultural reason.

My cousins Zac and Joe each had their Bar Mitzvahs during the 2006 Stanley Cup Playoffs. The Edmonton Oilers went on an incredible run, making it to the Stanley Cup Finals. Nobody thought they would make it past the first round. Those playoffs were such a great combination of family coming together and watching a magical and unlikely underdog run. More specifically, it was significant for me to get to watch playoff hockey with both brothers after Jordan moved to Toronto. Having all the extended family, there was just the icing on the cake.

I feel like this one of former Leaf’s Captain, Mats Sundin, as a Canuck scoring the shootout winner against the Leafs in Toronto is a special moment. Having the Toronto fans erupting in cheers even though their team had lost, is a testament to how loved Mats Sundin was to Leafs fans. Hockey fans are such jerks most of the time, but seeing the respect they had for Sundin, regardless of him now being on another team, I think it is an extraordinary moment.

This is my favourite hockey moment. The Captain always lifts the Stanley Cup first and does a victory lap. But Sakic’s selflessness to pass the Stanley Cup to Bourque, one of the league’s best defencemen, who had been chasing a cup for 22 years was just amazing.

In their inaugural season, the Vegas Golden Knights made it to the Stanley Cup Final. I truly thought they would finish dead last in the NHL with the way the expansion draft worked. That whole season just blew me away. Was hoping they’d take the cup, just for the story, but even going to the finals is absolutely insane. One of the most magical and meaningful stories in the NHL.

I think hockey as a whole is one of the most beautiful things in sports. The passion, the energy, the pace, etc. it all comes together to create one of the most powerfully beautiful moments in a person’s life (at least for the few hours you watch).

For me, it was at Game 6 of the 2015 Stanley Cup Finals in Chicago, the first time the Hawks could clinch the Cup on home ice in 78 years. The tradition in Chicago is to cheer the anthem while the best of the best Jim Cornelison belts out those beautiful words. During this anthem, however, with my adrenaline already coursing through me, I could literally feel the building shake as the 22,000 plus were all shouting together. I had chills and was brought to tears- the patriotism, the excitement for what was to come, and the tradition. It was one of the most incredible moments of my life.”

This is an easy question — my favourite hockey moment is the Team Canada Men’s Hockey overtime victory over Team USA in the 2010 Olympics in Vancouver. Not only was it a great hockey moment, but I will never forget the way the room erupted as we scored and the celebration downtown that ensued.

Why is it beautiful? The photo of us standing on the Granville Street Bridge with friends waving the Canadian flag is vividly seared into my memory. It’s undoubtedly one of my favourite, and perhaps most patriotic, moments as a Canadian. In a more critical sense, I think the beauty of that moment was the feeling of pride and elation shared by everyone in the city/country. 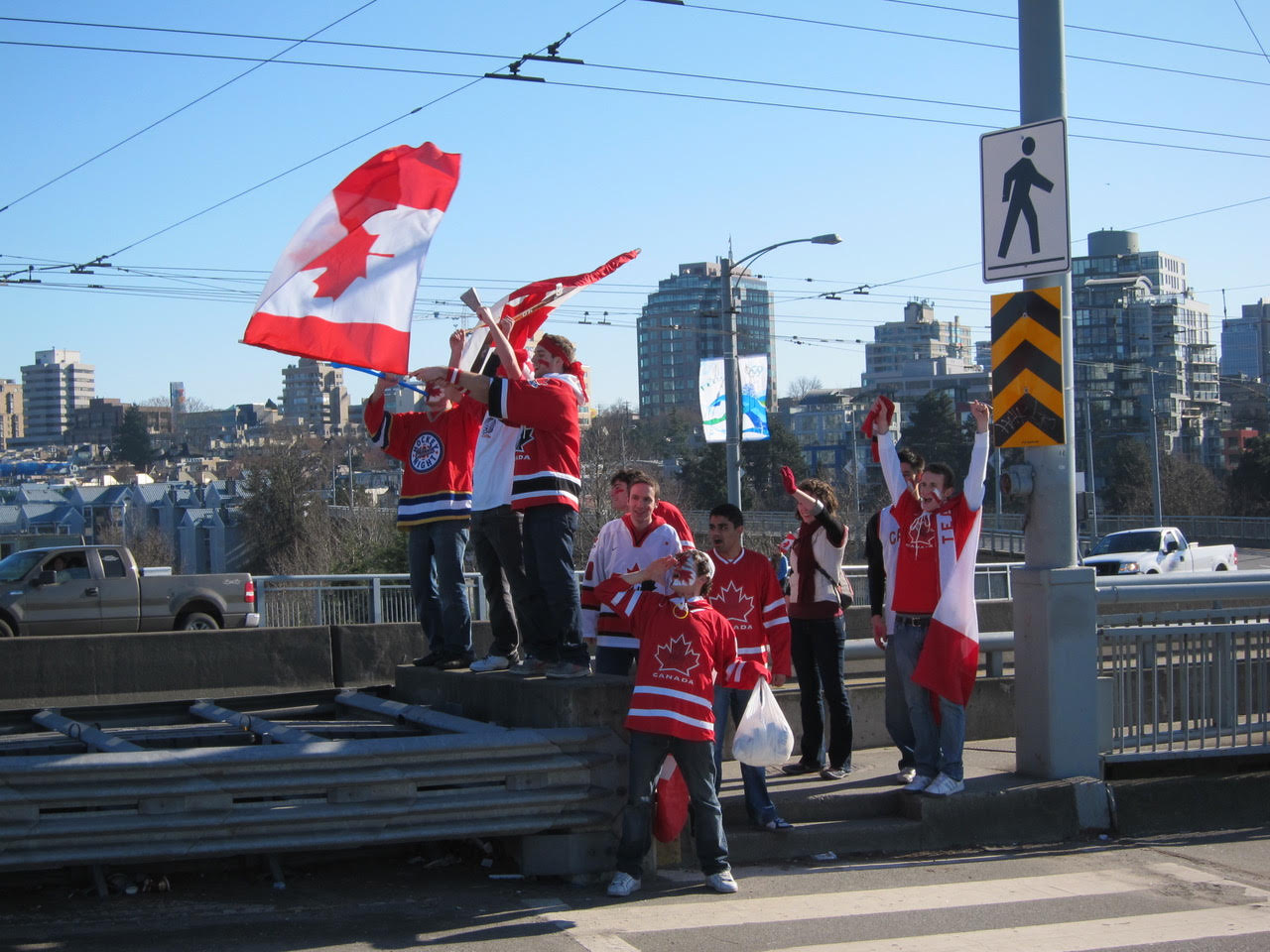 Think we missed something? Want to share your moment with us? Please do!