Today is 49 days, which is seven weeks of the omer: malchut she’b’malchut.

Y’all, we’re here: After 49 days, revelation beckons. I can’t begin to express how much this project and your support have meant to me over the past seven weeks. I’ll be writing a reflection — and sharing details for my plan to continue this project in a different form — in the next few days, but for now, I wish you a joyous Shavuot. May your learning be sweet and your cheesecake be yummy!

Apparently, while pitcher Leroy Robert Paige wore #29 during five of his six seasons in the majors, he wore #49 for part of the 1951 season with the St. Louis Browns. This is a lovely coincidence, because I was going to choose Paige today regardless. I’ve been wanting to highlight another Negro Leagues player, and Paige is malchut she’b’malchut personified. This happy synchrony is also fitting for the improbable and almost impossible career of this remarkable player.

His birthdate and surname spelling were both indeterminate; he grew up “hiding from truant officers and cops”; he barely knew his own father; he had so many brothers and sisters that he claimed not to know all of their names; and he began his life in the Deep South at the very beginning of the 20th century. Fame in the all-white major leagues seemingly couldn’t have been further away.

But after 15 years on 10 teams in the Negro Leagues, Paige became the oldest man ever to debut in the majors, at age 42 (or 43?) in 1948, and went on to be a two-time All Star and WS champion, the first Negro leagues player to pitch in the Fall Classic. It was, as unlikely as it seemed, his destiny. Paige would often tell reporters, “A pitcher is born a pitcher.” And he was the pitcher. As Joe Posnanski writes, “[T]here is every reason to believe he was the greatest pitcher on earth.” He knew it, too. 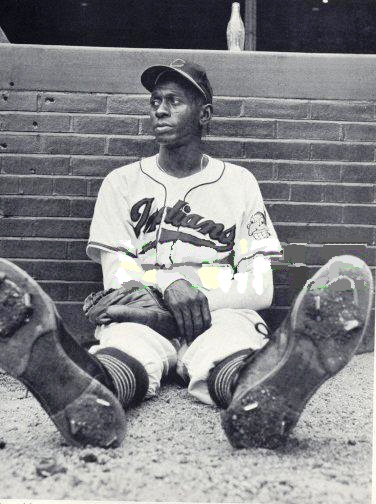 Paige made pitching a spectacle, and the crowds thronged to witness his showmanship. The stories about him (not unlike about Cool Papa Bell) are legendary. He would tell outfielders — and sometimes even infielders! — to sit down because he was going to strike out the next batter; he would intentionally load the bases and then retire the next three batters, just for the thrill; he regularly made guarantees before his games, to strike out the first three, or the first six, or the first 12 players he faced. He gave a nickname for everyone he met, and he had a quip for every situation he encountered.

There are too many stories to do him justice in a short blog post. (Read Satchel: The Life and Times of an American Legend for more.) The combination of pitch speed and pitch control was what made Ted Williams call for Paige’s inclusion in the Hall of Fame at his own induction ceremony. When asked about that fabled control, Paige would shrug and say, “Home plate don’t move.”

I chose Day 35 for the sefirah of malchut because of his record for runs scored. But you have to first advance from home to have a chance to make that happen, and it was hard to do that against Paige. Forget Rickey — it’s Satchel who owned home plate.

So let’s count this Day 49, the last day of the omer, this double dose of nobility and kingship, for the players whose greatest hope was “Maybe I’ll pitch forever.”