The ein sof (literally, “without end”) is understood in kabbalah as Gd before any self-manifestation. It is Gd’s act of tzimtzum (“contraction”) that allows for everything else to come into being. In particular, the ein sof is the origin of the sefirot (“emanations”), which have come to be associated with days of the omer, the seven weeks between Pesach and Shavuot.

Just as primordial boundlessness gave way to a set of spiritual realms, just as a tie game can lead to overtime, so, too, the suspension of sports now opens up Omertime.

Because of my devastation at the Astros’ cheating scandal, I had decided to sit out the 2020 baseball season: Little did I know that I’d be taking the rest of the world with me. In lieu of actually watching a game, I hope you’ll join me each day of the omer for baseball-inspired look at the different qualities associated with each week and day. (Daniel and Ben are tackling basketball and hockey, respectively.) 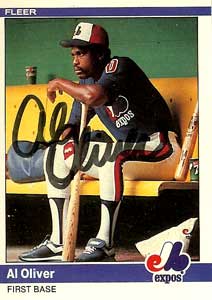 The first day of the omer isn’t until tomorrow evening, Thursday, April 9 — but we don’t have to wait until Day 1 to do a little baseball learning!

Today I want to highlight Al Oliver, who chose the number “0” in 1978 (my birth year) when he moved to the Rangers (in my birth state). “Zero is a starting point,” he said. “And I wanted to start all over again.”

“Scoop” had his best year in 1980, when he played 163 (!) games, one more than the standard season, because of a July-rain-shortened 1-1 tie in Chicago. (Only a couple of dozen major leaguers have ever played more than 162 games in a season.)

Day 0 of the omer doesn’t have a sefirah connected with it, but I like Oliver’s defiant insistence that zero means something, even while coaches and announcers said otherwise.

May the first night of Pesach be sweet — and come back tomorrow night for hesed she’b’hesed and baseball player #1 (in uniform, if not in prowess). Chag kasher v’sameach!

2 thoughts on “ein sof; or, making room for something new”