Today is 25 days, which is three weeks and four days of the omer: netzach she’b’netzach.

Though perhaps not technically an essential part of of this project, I am trying to make sure there is variety in my picks — in team, league, position, race, era, etc. There are certain players (i.e., Astros and their traditional big rivals, formally the Cards and Braves, now the As and Angels; and the Nats and theirs) whom I know better than others, so I want to work against my bias. That being said, it pains me to highlight someone from the Indians for the simple reason that the team’s name, logo, and nickname are odious, and they should not be spoken of or win any games at all until those change. Same for the Braves. (And for the football team from Kansas City. And dear Gd, for the football team from Washington.)

And lest you think this is theoretical for me: I went to a high school with the disgraceful mascot “Rebels,” complete with a 10-foot statue of “Johnny Reb” that was dragged out each Friday night football game. About 15 years ago the school mercifully changed to the mascot to the “Mavericks,” over the unfortunate objections of students and alumni, and yet the sun also rises.

Cleveland did decide a few years ago to remove the “Chief Wahoo” caricature from the team uniforms, over the unfortunate objections of fans, but the logo will remain on merchandise sold in the team’s regular season and spring training regions. And the name remains.

But none of this is all that relevant to today’s pick, infielder and DH Jim Thome; he played most notably for Cleveland, but also for the Phillies, White Sox, Dodgers, Twins, and Orioles. A master of the long ball, Thome was a five-time All Star and finished his career with 612 homers, including a record-setting 13 walk-offs. (Walk-off blasts are the exception to my general ambivalence — they are awesome.) He was elected to the Hall of Fame in 2018, his first year of eligibility. 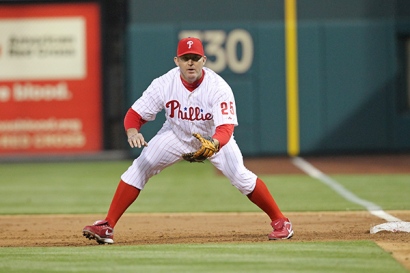 Today is another of the yamim kefulim, this week “endurance that manifests as endurance.” Thome well represents this double dose. The first way is in fashion: Thome wears knee socks outside of his uniform, a trend that has its roots in the stirrup socks of the Cleveland Red Stockings in 1868. Thome reported it was a way paying tribute to his Midwestern grandfather, an avid baseball fan. This sartorial choice is often mentioned in stories about Thome, so I suppose when he played it was unusual, but if the 2019 Astros are in indication, the style may be making a comeback. (I’m rewatching the 2019 season right now (I know), and in the game I’m watching as I type, Astros Springer, Altuve, Correa, Kemp, and Marisnick, plus Yankees Frazier, Gardner, Judge, LeMahieu, and Sánchez are all so-dressed.)

The second way is those walk-offs. As one writer waxed, “They were long, arching, majestic walk-off blasts that seemed to take forever to leave the ballpark.” Long, forever: Get it?

You can watch every one of Thome’s post-season homers in this compilation.

Thome also always had the long view in mind. He told Sports Illustrated in 2003,

As a player, you don’t really try to think about that (upset fans) too much. You want to go out and concentrate and do your job. That’s just how I want to approach it. The fans have a right to boo, you know? If they boo, it’s because you’re not doing your job. You just try to go out and do the best you can.

As was written upon his Hall of Fame election: “He wasn’t a flashy player; in fact, he was quite the opposite, a quiet fellow who did his job and happened to slam round-trippers. . . . He didn’t crave the attention. He was there to play ball for the love of it and to make valuable contributions to his team.”

Let’s count Day 25 in honor of this kid from Illinois who could go long and lasted longer.