Today is three days of the omer: tiferet she’b’hesed.

Today Yankees fans can stop being mad at me (see yesterday’s post) as I honor one of their best: The Bambino, The Sultan of Swat, four-time WS winner, one of the first inaugural five HoFers, perhaps the greatest baseball player of all time, the singular Babe Ruth. (Also perhaps the player with the most nicknames of all time.) 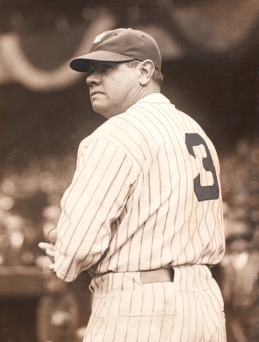 Tomes have been written about him, but instead of focusing on the man today I want to look at the legend. The quality of tiferet (beauty, harmony, splendor) to me reflects the transcendent nature of baseball. And Ruth is a huge part of the magic of this sport. His biographer Leigh Montville argues that timing played a role in his adulation: The post-war, post-flu-pandemic country needed a hero, and it found one in this larger-than-life slugger. In his history of the Yankees, Glenn Stout writes that “Ruth was New York incarnate—uncouth and raw, flamboyant and flashy, oversized, out of scale, and absolutely unstoppable.”

And it’s that last part that made me not want to dwell on the man: Ruth was known as much for greatness in the box as for iniquities in his life. That doesn’t make him unique among people, and certainly not among athletes. But it is hard sometimes for me to be a sports fan, with its focus on men whose damaging behavior is often minimized because of their talent. Of course, that phenomenon is also not unique to sports. This issue will likely come up again as we continue in our count.

But if there’s anyone who combined a wonder of play and a love of the sport, it was the Babe. So let’s count him a fitting match for Day 3.

One thought on “day 3: the bambino”