Today is 28 days, which is four weeks of the omer: malchut she’b’netzach.

It’s not an accident that, after only one in the first 20 days, four of the seven players in this week of netzach are pitchers. The position is a bit of a contradiction. On the one hand, pitchers are in the game relatively infrequently. In the modern era, starters usually only pitch once every five days, and relievers not more than two or three days in a row, and even closers, who are meant to pitch just one, final inning, only two or three days in a row. (Position players routinely take the field every one of the 162 regular season games.)

On the other hand, if the hardest thing to do in professional sports is to hit a baseball, then a close second has to be throwing that baseball. With the average pitch (at least in 2018) being 92-93 mph, staggering stress is put on the arm with each pitch thrown, so something like 5-10 major league pitchers a year have to have Tommy Johns surgery. Plus, pitching is such a solitary and such a high-profile, high-stakes position: The winning team of a matchup is often forecasted with the announcement of the teams’ starting pitchers, and they are assigned the game win or loss based on their performance. Victories and longevity, then, are key to a pitcher’s success.

By any modern rubric, White Sox pitcher Wilbur Wood is a throwback. After Madison Bumgarner pitched five scoreless innings in relief in Game 7 of the 2014 WS, after a complete game shutout in Game 5 two days earlier, The New York Times praised “his excellence in shouldering a workload that brings to mind the durable and dominant aces of old.” MadBum’s performance was indeed exceptional — by today’s standards. But not for Wood’s days.

From 1971 through 1975, as a starting pitcher, Wood won 106 games for the White Sox, working an average of 336.1 innings a year. Nearly 30 percent of Wood’s starts during that five-year period — 66 of 224 — came while working on two days’ rest or fewer since his previous start. (For comparison, one of the best pitchers in the league today, Geritt Cole, went 20-5 in 212.1 innings in 2019, with for sure at least four days’ rest between starts.) Wood was what you’d call a workhorse. What’s more, he excelled at pitching in relief in addition to starting. There are not many others who can claim that. 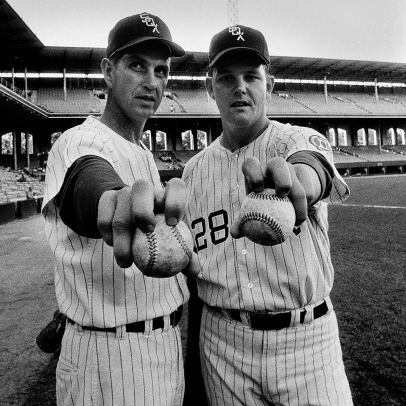 Wood was a knuckleball pitcher, which does put less stress on its hurler, as the pitch generally flies at 60-70 mph. (However, the knuckleball is notoriously hard to control, so Wood’s success is still incredibly impressive.) It was this feature that lead White Sox pitching coach Johnny Sain to urge starting Wood on short rest. Unconcerned about injury, Sain quipped about a pitcher’s arm, “It’ll rust out before it wears out.” With this philosophy, Wood achieved some unusual feats of endurance. On May 28, 1973, facing Cleveland, Wood pitched the remainder of a 21-inning carryover game that had been suspended two nights earlier, allowing only two hits in five innings to earn the victory. He then started the regularly scheduled game and pitched a four-hit complete game shutout, earning two wins in the same night.

By the way, his nickname is a dig at his Boston accent (though he, like his neighbors, past and present, would probably want me to point out that he was not born in Boston but near Boston, which is to say, Cambridge).

He’s been called “a case study in patience, resiliency, and determination”: an apt end to the week of netzach. As for malchut? For some reason, in an interview with Wood last year, Mark Liptak felt the need to clarify something about the pitcher’s appearance: He “wasn’t 6’5″ with a body by Adonis”: He was “a guy who didn’t look like a sculpted god.”

So tonight let’s count Day 28 in honor of a guy who may not have looked divine but certainly ruled over the game.