Today is 27 days, which is three weeks and six days of the omer: yesod she’b’netzach.

Besides loyalty to team and small ball (y’all are really getting to know my baseball preferences), there’s nothing I love more than a good nickname. Even better if that nickname comes from literally nowhere. And that’s what you get when you enter the major leagues at age 19 and get run over by crazy Charlie Finley.

Such is the case of pitcher Jim Hunter, who was always Jimmy to people in his home state of North Carolina but “Catfish” to the baseball world, evidently just because of Finley’s lark.

In the thickest irony there is, Hunter died at age 53 from Lou Gehrig’s disease, diagnosed when his right arm stopped working. The New York Times wrote in his obituary that “he did not have overpowering speed but possessed outstanding control, an assortment of superb pitches and a winner’s poise.” Washington Post columnist and Yankees fan Gene Weingarten offered this beautiful tribute upon Hunter’s death. He ends with, “Catfish Hunter, in control. That’s what I’ll remember.” 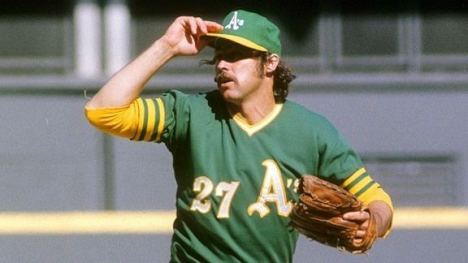 Hunter has the perhaps ignominious distinction of ushering in the era of player as big-money free agent, when at the advice of the player’s association in 1974, he took a grievance to arbitration and won “free agency,” a status previously unheard of in the baseball world. Two weeks later — after a bidding war involving 23 of the 24 MLB teams at the time — he became the highest-paid player in baseball and highest-paid pitcher in history when he signed a five-year contract with the Yankees worth $3.35 million. (With his two-year, $16.1 million contract with the Yankees, Roger Clemens told The New York Times in 1999 that Hunter “paved the way for me.” It’s OK, Cat, we won’t hold the Rocket against you.)

I think my record is clear on workers rights — including the right to be free from involuntary servitude — and there were huge problems with players indentured to one club their whole careers (see, Ernie Banks), but I hope we can all agree that baseball salaries are outrageous. To me, this is a mixed legacy (though certainly not one of his making).

Today’s sefirot, “endurance through foundation,” aptly describe Hunter. Yesod, according to Rabbi Art Green, “represents a new fullness or maturity of personal development.” Because, as Dylan sang, “Nobody can throw the ball like Catfish can,” let’s count Day 27 in honor of a man whose lasting legacy is building a new foundation of possibility for what a pitcher can be.